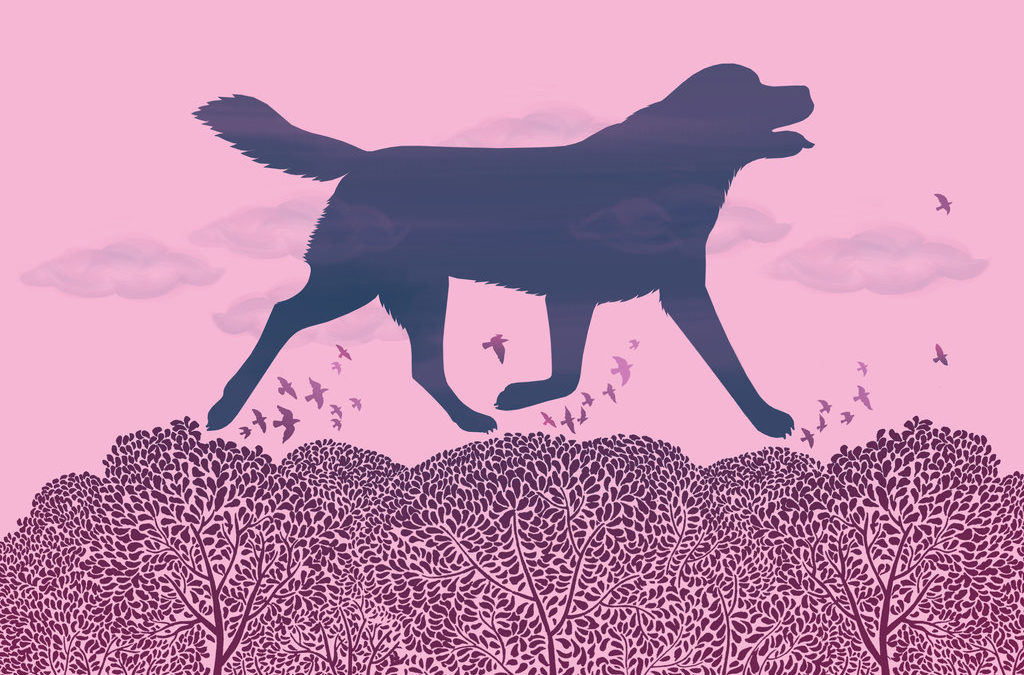 Here’s the moment when I knew. Juliet — the wiry lab-mutt we’d recently adopted from the pound — raced into our bedroom. In her enthusiasm, her gangly paws entangled a loose rug and she lost her footing. She catapulted through the air, an ebony mass of fur soaring toward the bed where our three-week old infant was lying flat as a Kansas pancake. It happened so quickly that all I could do was watch in fear as she plowed toward our 7-pound baby.

It was over in a split second. Somehow, in all of Juliet’s airborne frenzy, she managed to retain awareness of that speck of life beneath her and landed four paws safely around the baby. That’s when I knew everything would be fine. We parked the baby’s bassinet atop Juliet’s crate — our earliest iteration of bunk beds — and the love affair began.

A dog is both Rorschach and receptacle, a two-way highway for love unbounded and unadulterated. In a world that relentlessly enforces limits, the love of a pet is a refuge for unconstrained emotion, especially for a child.

It became even more apparent as Juliet aged. That infant on the bed is finishing high school, with two other teenagers right behind. While adolescents tend to be blithely self-centered in all manner of human interaction, when it came to Juliet, my three were solicitous, tender and concerned. They treated her as a treasured child whose every fault could be forgiven and whose every personality quirk was lauded like a work of Mozart, retold with the pride of parentage.

Everyone in our Manhattan apartment building knew Juliet, who never once failed to announce her lordship of the lobby with a booming woof upon exiting the elevator. After the fruit-stand vendor on Second Avenue noticed her shoplifting from a low-lying bin of string beans, he thereafter faithfully added a handful of them to my bag for her.

The last few years brought a gradual diminishment of Juliet’s orbit and of Juliet herself. Long afternoons at the dog-run shrank to walks around the block, which became a handful of steps just beyond the doorway.

Her hind legs began to sag when she walked, so we held up her back end with a harness. Then her front legs occasionally buckled, so we added a matching front harness, giving Juliet the improbable look of wearing a fluorescent-green bikini.

The kibble became too hard to chew, so we bought her the fancy canned stuff. Then we added in peanut butter and liver treats to tempt her taste buds. By the time she reached 17, Juliet had shrunk by 20 pounds, her silky jet-black fur sinking into the crevices between her bones. Her lack of body fat made cold weather more difficult, so we found a secondhand dog jacket to wrap around her. And when the snowy sidewalks were strewn with salt, we tugged purple rubber bootees onto her paws before every walk.

As a physician, I’ve always treasured the intimacy of the doctor-patient relationship, the emotional bond that’s created within the harrowing vulnerability of illness. But there is something about the physical intimacy of nursing that is particularly acute. Lifting, feeding or walking frail Juliet became a human-canine tango. It intensified our connection in a manner that felt almost primal. Even with the most mundane tasks, I found myself marveling at the particularity of her breathing, the way her ears creased just so, her luxurious bounty of neck fur, the slender lineation of her paws.

When her back legs failed entirely, we bit the bullet and purchased a doggy wheelchair. But the question always arose: When do you draw the line? We decided that as long as Juliet appeared to be without pain and seemed to take pleasure in giving and receiving love, we’d continue to adjust our lives to accommodate her.

Juliet still perked up at the rattle of a leash, still licked every drop of peanut butter (string beans were now too hard to chew), and still rallied a tail-wag when we walked in the door.

We attempted to prepare our children for the inevitable, but they refused to hear a word of it. They’d been witnessing her slow decline though, calibrating their care and attention accordingly. Crafting one’s own admixture of grief and denial is highly personal, a process best left unimpeded.

And then there was the morning when I, once again, knew.

For the first time ever in her life, this voracious omnivore declined food, even the gourmet canned stuff, even a liver treat garnished with peanut butter. The struggle to ambulate overpowered her implacable ardor for the great outdoors. We wished she could tell us what she was feeling, but we were forced to rely on our anguished observations. This moment seemed like the transition from frailty to suffering, and with a heavy heart I called the vet. She told us to come first thing in the morning.

Breaking the news to our children that Juliet’s moment had come was one of our most painful moments as parents. But the kids formed a tag-team to ensure that Juliet had someone by her side for every remaining minute that she’d never be without a warm human body nestled up against hers. We slept on the floor with her, snuggling into her rich downy fur, inhaling her ambrosial dogginess.

In the morning we scooped her up in our arms and carried her somberly to the vet.

In the exam room, we gathered around Juliet, forming a protective huddle. Throughout the preparations, she stayed her sweet self, absorbing the love as she always had, radiating back her boundless devotion, rewarding us with a soft wag of her tail.

After my husband took the kids out to the waiting room, I curled myself over Juliet, my cheek resting on hers, arm tucked into the snug of her chest between her front paws. My forearm gave a slight rise with each of her breaths and her heart beat trustingly into my palm. I whispered into her ear that it was O.K., that we were with her, that we loved her desperately, as the vet soundlessly injected the barbiturate.

Juliet’s heartbeats and breaths — suddenly exquisitely finite — continued to pulse faithfully into my embrace. Until they didn’t. Until movement became stillness. I kept holding her, though, because I couldn’t let go.

Death is not a stranger to me. I’ve sat with patients and families as death approaches. I’ve fought to stave off death and have been present to welcome death. I have been there for the aftermath. But I’d never been this close to the precise moment of death. I’d never held anyone so intimately as life handed off the baton.

My sobbing family returned to the room. Each in turn gave Juliet a final longing embrace. I’d maintained my doctorly composure throughout the morning, but watching my children bid Juliet farewell opened the floodgates for me.

Indeed, why does it have to be so painful? As a parent, your instinct is to protect your children from anguish. But at this moment, there was only the raw pain that is inextricably linked to love. It was an unvarnished introduction to life and the existential risks we take when we choose to love another being.

The mornings are lonelier now. The house is quieter. We all keep glancing expectantly toward Juliet’s spot on the living room rug. Its emptiness echoes from one heart to the next. We wish, of course, that she could have lived forever. But we have to make do with the gifts she left us. The most powerful is what Juliet gave to our children: the opportunity to tender — and to weather — unconditional love, love as an outward, selfless reach. She allowed them to experience what parents experience — love as the magnificent harrowing plunge.